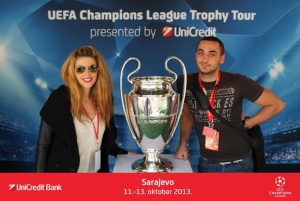 Millions dream about it, and can not be even close to it. Now You can – like never before!

This is how one of the biggest initiatives started within the UniCredit’s UEFA Champions league Sponsorship during which the Silver Amphora arrived to Bosnia and Herzegovina. This magnificent soccer event was a special gift to all of the soccer fans who had a chance to have a real sight of the official UEFA Champions league trophy which is reserved only for the winners of the most elite football competition. The visitors have also had chance to enjoy many other interesting soccer attractions.
Being a part of this project was a real pleasure for our employees, so the demanding preparations were not such a problem. Beside the pitstops in Banja Luka and Mostar, and the main event in Sarajevo with the multimedial and interactive exhibition, there was also organized a special entertainment programe for minors in the form of soccer games in all of the three cities
A part of the victorious atmosphere you can see in our photo gallery.