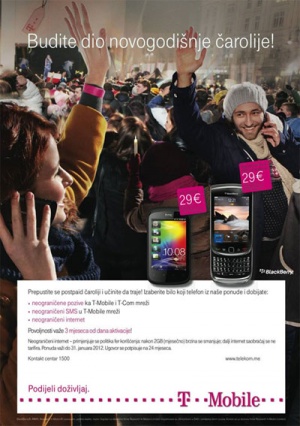 Each local marketing agency wishes to try itself in some other markets, to be a part of a large international project and to look further and wider from its own “backyard”.

And they say that when you wish something so hard “the entire world conspires to make it happen”. Today, as we write another story, we can say that this is what actually happened. For past two months we have been sharing experiences with colleagues from London, New York, Prague, Warsaw, Podgorica in order to create, with join forces, international, magical New Year’s campaign for leading telecommunication company Deutsche Telekom.
Preparations that have started in October, in cooperation with Saatchi&Saatchi London, have resulted in spectacular musical performance: a synchronized, hologram concert of Marriah Carey held in Montenegrin National Theatre. Several hundred lucky spectators that have received invitation from Crnogorski Telekom, our client and a member of Deutsche Telekom, enjoyed while greatest soul diva performed songs such as “Silent Night”, “Hero” and “All I Want for Christmas is You”. The concert was, apart from Podgorica, held simultaneously in several European cities with the help of hologram technology which transfers a three dimensional image of high quality in real time so that her fans in Frankfurt, Krakow, Skopje and Zagreb could enjoy. The hologram technology, used for the first time in Montenegro, has marked the beginning of new campaign “Be a part of New Year’s surprise” that has presented new offer to all prepaid, postpaid and fixed line users so that they can share the magic of upcoming holidays with their loved ones.