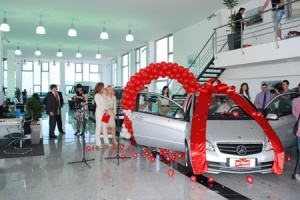 After we announced in the media, Grand cafe big prize game “Open and win” and got a winner, our task was to provide PR support to the ceremony of awarding the first Mercedes A-class winner.

We have prepared the press release and delivered it to daily newspapers, web portals, agencies and radio stations.  Special ar/upload/images/cockta-022.jticles were distributed to life style magazines. The news of the winner of the automobile was successfully placed in the public.  For the second winner of the Mercedes, event was not organized. We have prepared a press release and placed it to all media. This was also an opportunity to have in the media info about the position of Grand café in the market, according to data received from the Nielsen agency. With great dedication of the PR Team, a wide variety of publications was released in the media, and the company received reviews as one of the few that richly rewards its users.
In fact, most other companies that in their prize games awards winners with an automobile, decides on a much cheaper model and the less quality manufacturers.