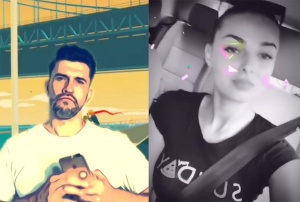 We took on the task of promoting Kviko, the mobile application for money transfer and GSM recharge, to our audience on social media almost a year ago. During this period, we organized numerous sweepstakes, created interesting campaigns and promoted the Kviko application through Facebook, Instagram, TV, radio and media.

In August, we were tasked with launching a new feature of Kviko app - Kviko GSM. We decided to go with an interesting jingle that we recorded as a short rap song.

The next step was to promote Kviko GSM on social media, so we decided to combine the cute jingles with creative key opionion leaders, better known as influencers.

The idea we came up with was a prize winning competition in which influencers would record a "Lip sync challenge" and invite their fans to do the same to win valuable prizes. The goals of the campaign were to promote new functionality, increase brand awareness and get creative and funny videos.

We choosed Šejla Ramović, Selver Fajković and Sanel Hadžić as KOLs for this campaign and together with them we achieved great results.

The campaign we designed has inspired our influencers as well as fans to create engaging and creative videos and push the boundaries of product placement with the help of influencer marketing.

The final results that the campaign achieved, showed us that the decision to go beyond the usual photos and stories seen on influencer profiles every day was a full blow!