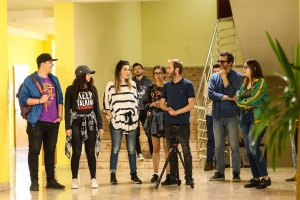 We work on all projects with dedication and value, but some of them give us special satisfaction, because of the extra values ​​they have for our lives and lives of our young people.

One such opportunity was given to us to work several months ago and to be completed in stages. After successfully doing the E4U Media Boot Camp and selecting the best youth teams and their short film scripts, we started shooting. We gathered renowned names from the world of production and young high school students from all around of BiH, and embarked on the adventure of shooting these inspirational video stories.

The filming of the Oksimoroni team on "Youth Mobility" was first completed, where high school students proved to be incredible actors and leaders, to whom many professionals would envy. Afterwards, we brought together a team called "Attackers Attackers" and they, with all their creative forces, "attacked" peer violence through their creative film, to explain to us all the importance of conveying a message of love and non-violence and to encourage young people to fight their own and others' bad practices.

The third in a series of filming was the one on the topic "Economic and Educational System in BiH", whose scenario was designed, filmed and superbly starred by the youngsters from the team "Detectives." They, just like real detectives, solved a very complicated case. The fourth and penultimate video story is one that warns us about the brain drain problem in Bosnia and Herzegovina. It was prepared by young people from the ZDDGV team and we are sure that no one will remain indifferent after looked at her.

We still have one last video of hate speech, with the "African Morbilli" crew, being shot tomorrow in Konjic. Until then, we are working hard on the last details, hoping for a beautiful and sunny day to shoot in the city on the most beautiful river in the world. Hold our figs.