Does the art live in Sarajevo? 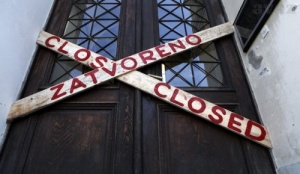 When it comes to Sarajevo it is fair to say that art, as a creative and timely unlimited aspect of every culture and cultural environment, barely lives here.

Political institutions in Sarajevo and Bosnia and Herzegovina feel that the culture or any form of artistic expression place unnecessary burden to the budget. As it is impossible to whisper to deaf ones or wink to the blind ones, it is equally impossible to explain our officials how the culture is essential to the future of any environment, society, country and identity.

It is true that the art, during many centuries, had to fight for its place under the sun but during last couple of years we came into such paradox situation where we suffocate and destroy even those things that were saved and preserved in the past. In this way we give up from our past and our right to a dignified memory for present and future generations. Closing of the National Museum in Sarajevo is the best example of cultural and artistic awareness in the country. This situation is additionally burdened with consumerism of those that should enjoy that very culture, citizens. The whole world is consumerist and conditioned by profit-gaining networks and marketing abuse. Add social insecurity and fight for daily bread to the equation and it is clear why art, in the frame of our reality, became less important.

Some time ago “Shopping Night” and “Night of Museums” were organized on the same night! Really, on the same night! Citizens stampeded their ways into shopping malls and decided to spend that night enjoying low prices of world famous brands. Only few dozens decided to visit, free of charge, some museums in Sarajevo that were also opened whole night. Halls of museums were half empty, while shoe and clothing stores were cramped with people. It is legitimate to ask if this is happening only in our country. Others are also complaining on position of culture and art in their countries.

However, “Night of Museums” is first-class cultural event in Zagreb. Picasso exhibition is scheduled for March 25th in Zagreb, and in previous years they exhibited Rembrandt and other world classic painters. Sarajevo, on the other hand, had only a glimpse of Picasso’s sketches for Guernica in B&H Art Gallery. And even then it was shameful to see half empty gallery halls that were craving for more people.

If we take a peek at shelves and books in our local libraries we will see that 2/3 of all books were bought from Serbian or Croatian publishers. Why? Due to lack of interest, highest VAT on books in Europe and many other problems our local publishers are practically ruined. Bosnian writers choose to go to Belgrade or Zagreb and publish their new books. If we take a look at the list of local writers who have made success in past ten or twenty years (Dzevad Karahasan, Aleksandar Hemon, Miljenko Jergovic and others) we will conclude that all of them choose some other country as a place to live and work. Position of fine art can best be seen by traditional exhibitions hosted by Collegium Artisitcum. Number of theater premiers is shamefully low and majority of them were done on basis of text written by foreign authors.

Closing of the National Museum in Sarajevo is a great shame to our nation. The State does not provide enough funding and does not worry about national treasure and therefore shows no interest in its future. It was a great mistake to hand this treasure to those who cannot run it, take care of it and cherish it as a great value. When you enter the National Museum it’s like you have entered any other state institution. You don’t even get a feeling that this building has anything to do with culture and art. People make the city they live in. In the same way people that work in the Museum make that Museum. They are the ones that should give him life. It is pointless to compare them to people that work in Louvre or receive salaries in time. The question is how to preserve basic dignity in art, culture and national memory.

We can always ask ourselves if the art and culture in general were neglected in the past? Yes, they were. They were always fighting to survive and gain some position. Greatest world artists lived in poverty and were discovered after their death. Therefore art is not strictly for artists or the ones that are creative but for the ones that receive and consume art, read books or visit exhibitions, theater plays, and movies.

Lack of any new art and endangerment of existing one that was preserved by former generation is what makes Sarajevo more and more a provincial city. Relations toward National Museum in Sarajevo, B&H Art Gallery, National and University Library or any other cultural institution are shameful and all of us that are saying nothing about it participate in this creepy anti-artistic, anti-cultural and anti-future apocalypse.